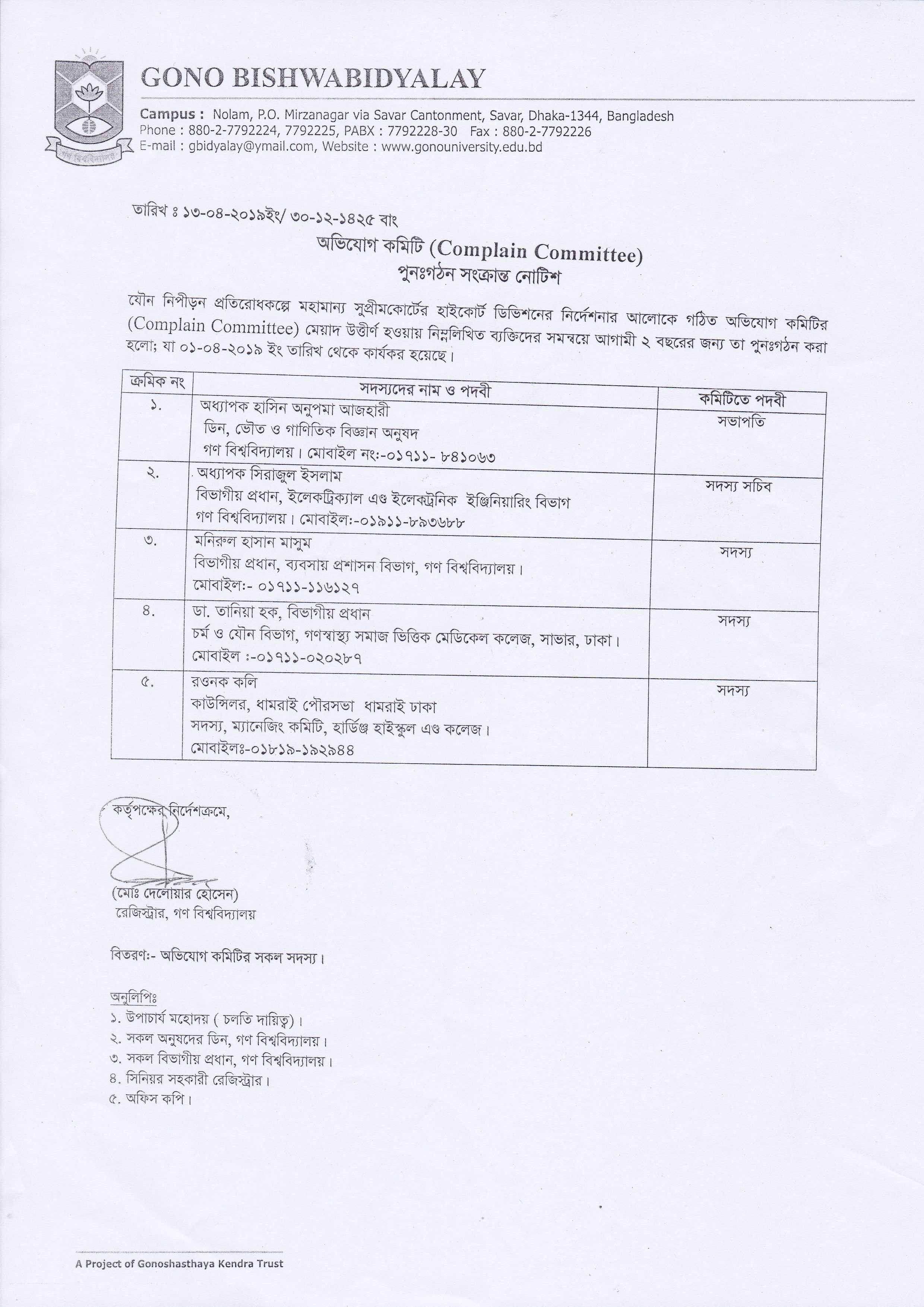 Directives in the form of Guidelines:

In the backdrop of our discussion and observations made above, and in view of the inadequacy of safeguards against sexual abuse and harassment of women at work places and educational institutions whereby noble pledges of our Constitution made in so many articles to build up a society free from gender discrimination and characterized by gender equality are being undermined everyday in every sphere of life, we are inclined to issue certain directives in the form of guidelines as detailed below to be followed and observed at all work places and educational institutions till adequate and effective legislation is made in this field. These directives are aimed at filling up the legislative vacuum in the nature of law declared by the High Court Division under the mandate and within the meaning of Article 111 of the Constitution.

The aims and objectives of these guidelines include-

(a) to create awareness about sexual harassments;

(b) to create awareness about the consequences of sexual offences;

(c) to create awareness that sexual harassment is punishable offence.

Since it is the duty of all citizens and public servants to observe the Constitution and the laws, and since the Constitution of the Republic in several articles ensures gender equality and the State‟s firm and consistent stand against all sorts of discrimination on the ground of sex, and since the Constitution ensures equal rights of women with men in all spheres of the State and public life and contemplates equality before law and right to equal protection of law, it shall be the duty of the employers and other responsible persons in work places, and the authorities of all educational institutions to maintain an effective mechanism to prevent or deter the commission of offences of sexual abuse and harassment, and to provide effective measures for prosecution of the offences of sexual harassment resorting to all available legal and possible institutional steps.

Such conduct mentioned in clauses (a) to (l) can be humiliating and may constitute a health and safety problem at workplaces or educational institutions; it is discriminatory when the woman has reasonable grounds to believe that her objection would disadvantage her in connection with her education or employment in various ways or when it creates a hostile environment at workplaces or educational institutions.

iii) Disciplinary Rules mean rules prescribed by any Act or Ordinance or any other sub-ordinate legislations and include any rules framed for maintenance of discipline in any public or private institutions, organisations and work places.

All employers and persons in charge of work places and authorities of all educational institutions shall take effective measures for prevention of sexual harassment. To discharge these obligations, they shall take, amongst others, the following steps:

Appropriate disciplinary action must be initiated in case of any falling within the definition of sexual harassment and torture in clause 4 of these guidelines.

Where such acts do not constitute misconduct under the disciplinary rules, an appropriate and effective mechanism must be evolved at the workplaces, and educational institutions, in both public and private sectors for record and redress of the complaint made by the victim. The following measures must be included in the complaint mechanism.

(a) It must be ensured that the identity of the complainant and also that of the accused will not be disclosed until the allegation is proved;

(b) Security of complainant will be ensured by the Concerned Authority;

(c) Complaint can be lodged by the victim or through her relatives, friends or lawyers, and it can be sent by mail also;

(d) A complainant can file the complaint with a female member of the Complaint Committee separately;

(e) The complaint will be lodged with the Complaint Committee to be constituted as provided in clause 9 below.

(a) In all work places and educational institutions in both public and private sectors, the Concerned Authority will constitute a Complaint Committee in order to receive complaints, and to conduct investigation and make recommendations.

(c) The Complaint Committee should have at least two members from outside the organization concerned, preferably from organizations working on gender issues and sexual abuse.

(d) The Complaint Committees will submit annual reports to the Government on the compliance of these guidelines.

i). In case of minor harassment, if it is possible, the Complaint Committee shall dispose of the complaint with the consent of the parties involved and shall report to the Concerned Authority of the educational institution or work place in public or private sector, as the case may be.

iii) The Complaint Committee will have the power to send registered notice by mail to the parties and the witnesses, conduct hearing, gather evidence, and examine all relevant papers. In this type of complaint, apart from oral evidence emphasis should be placed on circumstantial evidence. To conduct the work of the Complaint Committee effectively the related office of the educational institutions and workplaces in both public and private sectors will be bound to extend any cooperation which is requested from them. The Complaint Committee will keep the identities of the complainant/s confidential. While recording the testimony of the complainant/s any question or behaviour which is intentionally base, insulting or harassing should be avoided. The testimony must be recorded in camera. If the complainant wants to withdraw the complaint or stop the investigation then the reason behind this has to be investigated and mentioned in the report.

The Complaint Committee shall submit the investigation report with recommendation within 30 working days to the Concerned Authority of the educational institution or work place, as the case may be. The period of 30 days may be extended up to 60 days where it is found necessary. If it is proved that a false complaint has been filed intentionally then a report will be submitted to the Concerned Authority recommending appropriate action for the complainant/s. The Complaint Committee will take decisions on the basis of the view expressed by the majority of its members.

The Concerned Authority may suspend temporarily the accused person (other than students) and in case of students, may prevent them from attending their classes on the receipt of the recommendation of the Complaint Committee. If the accused is found guilty of sexual harassment, the Concerned Authority shall treat it as misconduct and take proper action according to the disciplinary rules of all work places and the educational institutions in both public and private sectors within 30 (thirty) days and/or shall refer the matter to the appropriate Court or tribunal if the act complained of constitutes an offence under any penal law.

We direct that the above guidelines will be strictly followed and observed in all educational institutions and work places in both public and private sectors until adequate and appropriate legislation is made in this field.

In this judgment the expression, “woman” has been used to include a female of any age as defined in the Nari-O-Shisu Nirjaton Daman Ain, 2000.

In the result, the Rule and the supplementary Rule are made absolute with the directives in the form of guidelines described hereinbefore.

We would like to record our note of appreciation to Mr. Mahmudul Islam who assisted the Court as amicus curiae by rendering valuable assistance in the performance of the difficult task in public interest.

There is no order as to costs.